“Meatless Meat” and the Rise of Plant-Based Protein

A key feature of the coronavirus pandemic was the disruption of supply chains worldwide. These distribution networks affected the meat industry, with ranchers often unable to get their animals to market due partly to curtailed production resulting from closed meat-packing plants. Some workers got sick and several COVID-related deaths resulted. Consumers noticed the effects of this, as grocery store meat departments scaled back on stocking meat products and certain cuts of meat became difficult to obtain. At the same time, those fast-food restaurants that remained open had difficulty obtaining ground beef and other meat products.

The meat industry’s labor intensity and difficulties with its supply chain are a couple of the reasons why many consumers are considering meat alternatives more and more. One alternative previously considered a niche market is now making its way into the mainstream: plant-based meat analogues. The market for processed plant foods that mimic real meat's appearance, feel, and taste is growing globally and is expected to surpass $35 billion by 2027. While supply chain issues encouraged many consumers to try plant-based meat analogues within the past couple of years, they have become increasingly popular for many other reasons, and the market for them continues to grow.

As an important source of protein, essential amino acids, and other nutrients, the demand for meat globally remains high. However, considerable challenges are being realized as the meat industry’s sustainability has come into question. Producing meat has been shown to cause increasing problems in a world where the population continues to rise.

Challenges associated with the meat industry worldwide include:

These factors contribute to an ever-increasing market for plant-based meat analogues. Even consumers in developed countries have been looking for more sustainable options, with many reducing meat from their diets. Flexitarian diets have become more common as a result, as consumers reduce the amount of animal-based foods they ingest, making their diets more plant-based.

According to a Good Food Institute (GFI) report, by 2030, plant-based meat analogues look to account for as much as 6 percent of meat consumption if their use increases at current rates. This would require the production of about 25 million tons of plant-based meat products. However, meat analogues require increased investment over the next several years so that consumer demand won’t outpace the amount the industry can produce and deliver.

What Are Plant-Based Meat Analogues Made From?

The challenges involved in developing plant-based meat analogues that adhere to the characteristics of animal flesh are many, however. For those who eat meat regularly, the color, flavor, taste, and texture must closely mimic animal meat.

To closely match the characteristics of meat, several different plant-based ingredients are combined.

Plant proteins are key to any plant-based meat analog. Selecting these proteins depends on several factors, however, including their accessibility, cost, and functionality. Producers must consider how the properties of each plant protein affect the overall aspects of a meat analog.

Properties in plant proteins that producers must consider:

Nearly two-thirds of plant-based meat analogues use soy or wheat. Soy is the most-used plant protein due to its availability, comparable digestibility to meat, and similar properties. Wheat gluten is often used, while barley, oats, and rice often feature in plant-based meat analogues. Cereal proteins are less digestible and have fewer amino acids. More recently, proteins from garbanzo beans, lentils, lupines, mung beans, yellow split peas, and other legumes have featured as ingredients in these analogues, though legumes require more processing. Additionally, oilseeds like canola and rapeseed are utilized as a protein source.

Another important factor when developing plant-based meat is how well they simulate the flavor, juiciness, mouthfeel, and tenderness of meat. This is particularly important when analogues seek to copy certain cuts of beef. Fats like canola oil, cocoa butter, coconut oil, corn oil, palm oil, and sunflower oil are often used for this.

The high content of saturated fat in coconut oil has made it an important component in plant-based meat. Analogues utilizing it, however, currently have to deal with price fluctuations, limited processing capabilities, and unpredictable supply chains. Because of this, many producers have been exploring other options. Due to current events in sunflower-producing regions, supply chains for sunflower oil are also an issue, though this is likely only a short-term problem.

How an analog’s ingredients interact with each other is determined by what’s used to bind them together. Consistency, stability, and texture of the product depends on this binding agent. These might include flours, gums, or starches, including acacia gum, carrageenan, methylcellulose, xanthan gum, and others.

When consumers buy plant-based meat analogues, taste is one of the first things to draw or repulse them. Seasonings, spices, yeast extracts and other substances that introduce flavor are added to achieve a meat-like flavor.

The look of an analogue is a significant factor in a consumer’s purchasing decisions. Before cooking, an analogue made to mimic raw beef should be bright red, whereas analogues for chicken or pork should be pinkish in hue. To match coloration of these meats involves vegetable products like tomato paste, carrot juice or beetroot juice. When cooked, chemical reactions should then turn plant-based meat analogues a brownish shade.

How Plant-Based Meat Analogues Are Processed

Traditional processing of food-based crops focuses on extracting carbohydrates and oils, but to achieve the framework and performance of animal-based proteins, processors must optimize plant-based protein enrichment of raw ingredients. These plant proteins require enhancement via processing to best mimic animal meat’s fraction composition, functionality, and protein yield, along with its structural and physicochemical properties. Processors of conventional ground meat have an advantage when positioning themselves for making plant-based meat. Analogues made from plants are processed through dry protein fractionation, extrusion, and shear cell technology.

This process separates high-melting triglycerides from low-melting ones and is the least expensive method for processing oils and fats. Used since the 19th century, dry fractionation is also the process by which the first margarine was produced. It’s now used to make plant-based meats for palm oil, cottonseed oil, sunflower seed oil, palm kernel oil, and other plant oils.

Other methods for extracting plant proteins, fibers, and starch use solvents and require a great deal of energy. Dry fractionation offers a more efficient means to make meatless meat without using solvents that can alter the structure and nutritional value of the plant material. Less energy intensive and requiring less water than wet fractionation, dry fractionation can be achieved through sifting and sieving, air classification, electrostatic separation, or combining all these methods.

Air classification separates powder particulars by density, size, and how well they disperse in solutions. It uses the aerodynamic properties of different particles to separate them; for example, particles containing plant-based proteins tend to be smaller than those containing starch, so they tend to separate with fines as they’re more aerodynamic.

Though dryfractionation has benefits, it normally produces protein concentrates with lower purity, and oil can also effectively lower dispersibility. Combining air classification with electrostatic separation helps enrich these plant proteins, which is why many researchers are looking at ways to further improve the dry fractionation process. 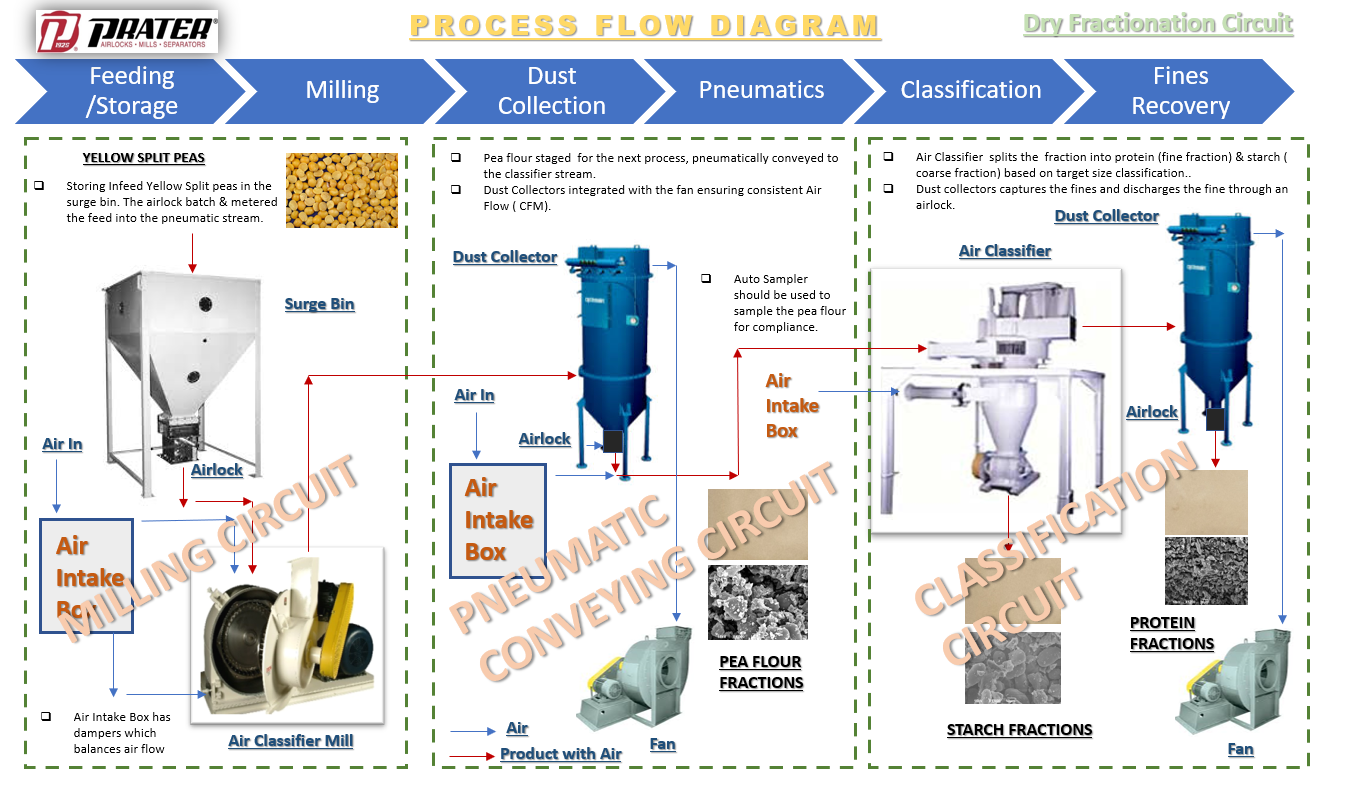 Extrusion uses a combination of heat, mechanical shear, and pressure, involving equipment known as an extruder. Consisting of a system for preconditioning, along with a feeder, screw, barrel die, and cutting machine, this processing method uses raw materials that have been dried or otherwise preconditioned. Fed into the extruder first melts the material through temperature, shear rate, and pressure, which is then pushed through the die. The process can also be conducted in low or high moisture environments, depending on the desired end product.

Low moisture extrusion produces textured vegetable protein, with the final product having a dry, expansive, and sponge-like consistency that allows it to absorb water readily. This analogue requires rehydration before use, and is used primarily for minced plant-based meat analogues, such as burger patties, meatballs or sausages. High moisture extrusion also uses preconditioned material, though it starts with using 60-70 percent moisture, giving the finished product a higher moisture content. This technique uses a co-rotating twin screw extruder, which heats the material to about 120-180˚C (248-356˚F) before going through the cooling die. This results in a compact end product with a fibrous texture, which is used as an alternative for whole muscle meat products.

Based on the principle of flow-induced structuring, this process makes an end product that mimics whole muscle meats. It uses a device shaped like a cone, with a bottom cone that rotates and a top cone that remains stationary. Force and heat combine with sheer force to form a fibrous material akin to animal meat.

Sanitation procedures are another area where plant-based meat analogues differ, with equipment used to make animal-based products more difficult to clean. This is mainly because animal fats resist water, meaning more chemicals must be used for cleaning machinery used for processing. Though certain starches and gums in plant-based meat analogues are more difficult to clean, they can still be cleaned off with water.

Upscaling production of plant-based meat analogues will become increasingly necessary with the quick growth in the market. Adapting meat-processing equipment is challenging. Larger machinery must be capable of mixing in higher volume receptacles. Processors looking to scale up their operations should engage with an equipment manufacturer with a testing laboratory.

Prater Industries provides machinery, tools, and expertise for commercially processing plant-based meat analogues. Additionally, we can design and integrate equipment for specific processes with the help of our state-of-the-art testing facility. Our fine grinding and air classification equipment are particularly suitable for such processing.

Using high-speed impact, Prater’s fine grinders take the raw material that’s meter-fed into the mill, colliding with internal rotor blades. This material accelerates outwards, creating additional impact and shear against the face of the screens and stationary jaws. These fixed surfaces cause the particles to decelerate, which helps maximize the differential in impact speed when rebounding back into the rotor blade. Once properly sized, particles are pulled through the screen and on to the next processing stage.

Utilizing a three-stage process, Prater’s air classifying mills use air to classify and convey material. Metered product first enters behind the rotor, with grinding blades impacting and accelerating particles outward, while additional collisions against screens and jaws until small enough to get through the screen. Those particles then circulate outside the grinding chamber, with material classified and on-size particles conveyed via air to the next stage. Rejected particles go on to the second grinding stage, reentering the grinding chamber in front of the rotor. This reground material goes on to the classifier and combines with the product from the initial grinding stage.

Prater’s air classifiers separate particles by size within a pneumatic circuit, utilizing and adjusting centrifugal force as needed. Introduced through the primary air inlet, the airflow acts to smooth out the raw product, creating drag force that acts in tandem with the size and density of the particles that varies how much force is applied. These particles are then directed towards the classifier’s rotor, where smaller, smoother particles pass through as fines and larger, coarser particles move away from the rotor. The larger particles are then discharged through a rotary airlock under the machine. A secondary air inlet allows an adjustable airflow upwards into the classification area, keeping near-size and agglomerated particles suspended in the airstream to allow them to be classified along with the stream of finely ground material.